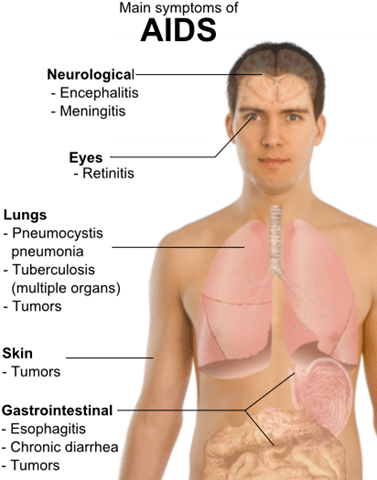 WHAT ARE THE SYMPTOMS OF HIV?

The symptoms of HIV vary, depending on the individual and what stage of the disease you are in.

Within 2-4 weeks after HIV infection, many, but not all, people experience flu-like symptoms, often described as the “worst flu ever.” This is called “acute retroviral syndrome” (ARS) or “primary HIV infection,” and it’s the body’s natural response to the HIV infection.

You cannot rely on symptoms to know whether you have HIV. The only way to know for sure if you are infected with HIV is to get tested. If you think you have recently been exposed to HIV—if you have had oral, vaginal or anal sex without a condom with a known HIV positive person or a partner whose HIV status you do not know or shared needles to inject drugs—get an HIV test. Traditional HIV tests detect HIV antibodies. But during this early stage your body is not yet producing these antibodies. A new HIV test was approved in 2013 that can detect the presence of HIV in your body during this early stage of infection. So no matter where you get tested, it is very important to let your provider know that you may have been recently infected with HIV and you would like to be tested for acute HIV. Use the HIV/AIDS Testing and Services Locator to find a HIV testing site near you or enter your location here:

It is important to remember that with or without symptoms, you are at particularly high risk of transmitting HIV to your sexual or drug using partners during this time because the levels of HIV in your blood stream are very high. For this reason, it is very important to take steps to reduce your risk of transmission.

After the early stage of HIV infection, the disease moves into a stage called the “clinical latency” stage. “Latency” means a period where a virus is living or developing in a person without producing symptoms. During the clinical latency stage, people who are infected with HIV experience no HIV-related symptoms, or only mild ones. (This stage is sometimes called “asymptomatic HIV infection” or “chronic HIV infection.”)

During the clinical latency stage, the HIV virus reproduces at very low levels, although it is still active. If you takeantiretroviral therapy (ART), you may live with clinical latency for several decades because treatment helps keep the virus in check. (Read more about HIV treatment.) For people who are not on ART, this clinical latency stage lasts an average of 10 years, but some people may progress through this phase faster.

It is important to remember that people in this symptom-free period are still able to transmit HIV to others even if they are on ART, although ART greatly reduces the risk of transmission.

Again, the only way to know for sure if you are infected with HIV is to get tested. Tests are available that can detect the virus at this stage. Use the HIV/AIDS Testing and Services Locator to find a HIV testing site near you.

If you have HIV and you are not taking HIV medication (antiretroviral therapy), eventually the HIV virus will weaken your body’s immune system. The onset of symptoms signals the transition from the clinical latency stage to AIDS (Acquired Immunodeficiency Syndrome).

During this late stage of HIV infection, people infected with HIV may have the following symptoms:

Each of these symptoms can be related to other illnesses. So, as noted above, the only way to know for sure if you are infected with HIV is to get tested.

Many of the severe symptoms and illnesses of HIV disease come from the opportunistic infections that occur because your body’s immune system has been damaged. (Read more about opportunistic illnesses.)

For more information, see the National Library of Medicine’s AIDS.