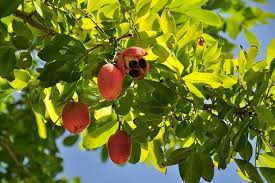 In Jamaica, the ackee fruit is a mixed blessing. Though originally native to West Africa, it migrated to Jamaica in 1778 and is now the country’s national fruit.

The ackee’s scientific name is Blighia sapida, and it is a member of the sapindaceae plant family. This scientific name honours Captain William Bligh, a famous English sailor who took the fruit from Jamaica to the Royal Botanic Gardens in Kew, England in 1793, where it was introduced to science.

The fruit is pear-shaped. When it ripens, it turns from green to a bright red to yellow-orange, and splits open to reveal three large, shiny black seeds, each partly surrounded by soft, creamy or spongy, white to yellow flesh—the aril. The fruit typically weighs 100–200 grams

Ackee trees are found across the island of Jamaica but the main producing areas are located in Clarendon and St Elizabeth. There are two bearing seasons: between January to March and June to August.

The use of ackee in food is especially prominent in Jamaican cuisine, Ackee is the national fruit of Jamaica, and ackee and saltfish is the national dish. Ackee pods should be allowed to ripen on the tree before picking. Prior to cooking, the ackee arils should be cleaned and washed. The arils then boiled for approximately 5 minutes and the water discarded. The dried seeds, fruit, bark, and leaves of akcee trees can be used medicinally. The fruit causes severe vomiting that can lead to convulsions, coma or death, but this only occurs if the fruit is immature/unripened when consumed.