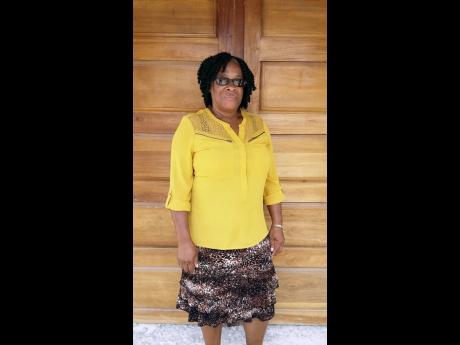 Jennifer Mitchell-Johnson
The Lord will do whatever it takes to get man’s attention. Jennifer Mitchell-Johnson of the Bryans Land Church of God in Christ in Clarendon is a witness to this statement. Mitchell-Johnson, who serves as an evangelist and church secretary, testified that she started out with the Lord 26 years ago, but at one point, she slipped up on her Christian journey. “I was saved and drifted from the presence of the Lord, while working as a domestic helper. I left some food for my son, who was at home with my grandmother and my cousin. My cousin gave my son a tablet which was being taken by my uncle, who was of unsound mind,” said Mitchell-Johnson. She said after her son consumed the tablet he started to experience epilepsy. This, she said, contributed to her having to rush him to hospital on numerous occasions.

“When he was about nine years old I still did not return to the Lord; and in 1990 I remember one morning he said that he did not feel like going to school. At that time, we never had any gas stove, and so I asked someone to sell me a bundle of wood. When the person came with the wood my son said he would have got me a better bundle. I did not hear anything else from him after that; and when I looked he was on the ground suffering from epilepsy,” said the churchwoman, adding that she rushed her son to hospital and was there until very late in the night.

When she left the hospital she went home, got a cup of tea and retired to bed. “I had a dream in which I saw a man. His back was turned to me in the dream; and he told me that if I did not return to the Lord my child would not be healed. When I woke up the morning, I told myself that what the man said was serious, and returned. Since then my son has not been affected by that illness,” testified Mitchell-Johnson.

The woman of God, who is a prayer warrior, said on another occasion she was drifting from the Lord when she received a call from someone, who told her that her son was at a hospital in Kingston suffering from a broken nose.

“It was right there and then that I realised that my son was a covenant between me and God. Whenever I am strong in the Lord he prospers; but if I ever drift from God something starts to happen in his life. I have come to learn about the healing power of God; and I have come to know that whatever God promises us it will come through,” she noted.

The churchwoman testified that despite her son’s challenges then, he has turned out to be a doctor of philosophy and an engineer. This, she said, is a remarkable testimony for her.